What if I told you there was ONE magic ingredient to boost cognitive function and improve overall health and wellness? You wouldn’t believe me as this superfood element has been villainized for decades.

The superfood element is animal fat. It has been essential for the evolution of human life as well as the development of our unique brain.

If you have read or listened to the media surrounding food and nutrition, you undoubtedly have been inundated with misinformation that animal fat is the cause of many chronic diseases and a shortened lifespan.

You’ve been repeatedly told that “fat makes you fat” and that “animal fat causes cardiovascular disease and cancer”. Both statements are false if the animal fat comes from grass-fed, grass-finished animal sources that have consumed their organic, natural foods that are not tainted with chemicals of any kind.

Animal fat provides energy and is needed for hormone production and functional cell membranes. And animal fats can fight the battle of the bulge. Without healthy animal fat, we would be less satiated after a meal, and we would become hungrier more quickly. And animal fats, especially saturated palmitic and stearic fats, help reduce the excess storage of fat in fat cells.

In addition, animal fat helps the absorption of necessary vitamins and minerals.

Below is a 22-minute video by Paul Saladino, MD (author of the Carnivore Code). He discusses the importance of saturated animal fats, especially long chain saturated fats (palmitic, stearic) which are found in beef and lamb. They are the healthiest among all fats. In this video, Paul also discusses the harm of excess linoleic acid, which is a polyunsaturated fat that is present in excess in vegetable and seed oils as well as chicken and pork if they have been fed corn or soy products.

In an article published in the 2017 edition of The Lancet, saturated fat was specifically shown to be healthy. The authors also explained how high carbohydrate intake was associated with higher risk of total mortality. Yet, total fat and individual types of fat were related to lower total mortality. Total fat and types of fat were not associated with cardiovascular disease, myocardial infarction, or cardiovascular disease mortality. And saturated fat had an inverse association with stroke.

Slowly, the world is relearning that animal fat is healthy. As I already stated, the animals must be fed a natural diet, humanely raised and butchered, and not injected with any chemicals.

In this 2020 article in the Journal of the American College of Cardiology, the authors wrote in their abstract …

The recommendation to limit dietary saturated fatty acid (SFA) intake has persisted despite mounting evidence to the contrary. Most recent meta-analyses of randomized trials and observational studies found no beneficial effects of reducing SFA intake on cardiovascular disease (CVD) and total mortality, and instead found protective effects against stroke. Although SFAs increase low-density lipoprotein (LDL) cholesterol, in most individuals, this is not due to increasing levels of small, dense LDL particles, but rather larger LDL particles, which are much less strongly related to CVD risk. It is also apparent that the health effects of foods cannot be predicted by their content in any nutrient group without considering the overall macronutrient distribution. Whole-fat dairy, unprocessed meat, and dark chocolate are SFA-rich foods with a complex matrix that are not associated with increased risk of CVD. The totality of available evidence does not support further limiting the intake of such foods.

A study published in 2016 identified the percentages of the various types of fatty acids in both US grass-fed beef compared to US grain-fed beef. Here is a table from the published paper: 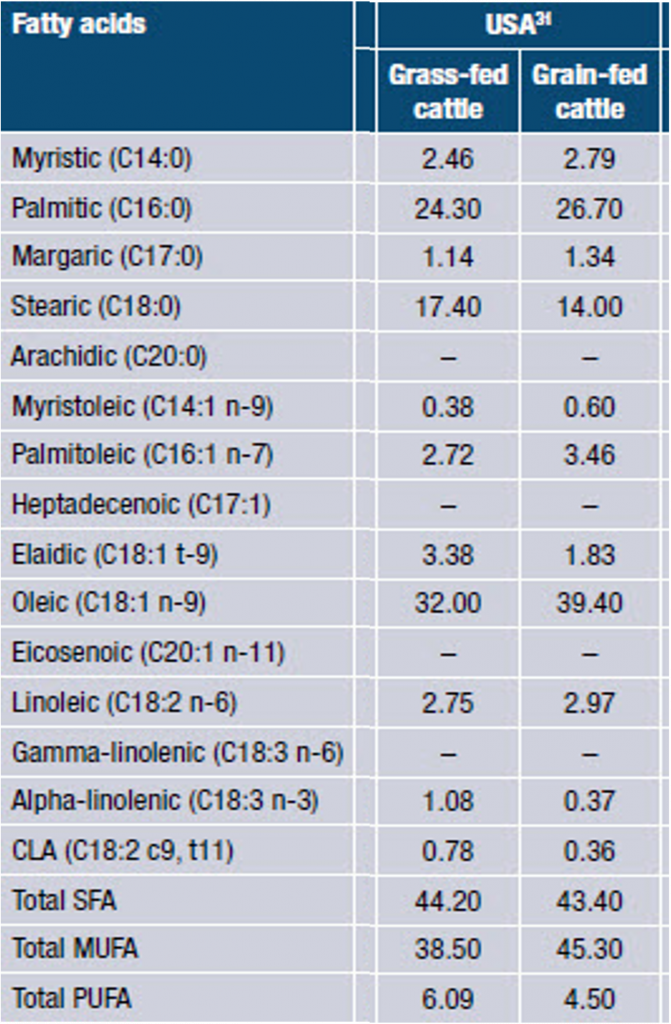 How Did Animal Fat Get Vilified?

The vilification of animal fat began in 1958 when Ancel Keys began his research for the Seven Countries Study, which eventually was published in 1978. However, Denise Minger researched the real truth about Ancel Keys’ research, and various papers have been published which have debunked as well as supported Ancel Keys’ research.

Ancel Keys wanted to prove a direct correlation between heart disease and fat intake. This theory is known as the lipid or cholesterol hypothesis. Ancel Keys suggested that the ingestion of saturated fat (which can raise blood levels of cholesterol) would clog up your arteries, leading to heart disease.

His ongoing research was widely debated, then accepted, and eventually picked up by the health industry. By 1961, the American Heart Association recommended that butter should be replaced with polyunsaturated seed oils, and that animal fats should be avoided. The aim was to lower cholesterol levels. And in 1980 the US government issued dietary guidelines to cut back on saturated fat and cholesterol.

There were many problems with Ancel Keys’ research. Some of them are below …

How to Get Animal Fat in the Diet

There is no direct weighing of the food or amount one should force himself or herself to eat. You eat when you’re hungry to the point you feel comfortably full but not stuffed. The fat in the diet helps your body become satiated. You also drink water replete with trace minerals whenever your thirsty. And you drink until your thirst is quenched.

This is a high fat, moderate protein way of eating. Your goal is to eat about 2 grams of fat for every 1 gram of protein until you feel full. The high fat content can be eyeballed. For example, if you are making eggs or cooking ground beef or ground lamb, you could add extra ghee or tallow (or suet) to your preparation of the food. If you make a soup with bone broth, you could add additional ghee or suet to the soup. If you can tolerate dairy, triple crème brie offers up to 4:1 ratios of grams of fat to grams of protein.

The amount of carbs you consume depends on the number and types of selected plants you choose.

Here is a graphic that shows the grams of total fat and protein in ghee, beef tallow (or suet), beef ribeye, lamb loin chop, ground beef, ground lamb, eggs, triple crème brie, and raw gouda cheese. To increase the fat-protein ratio measured in grams for any given meal, you can add ghee and/or tallow (or suet) to the food preparation. 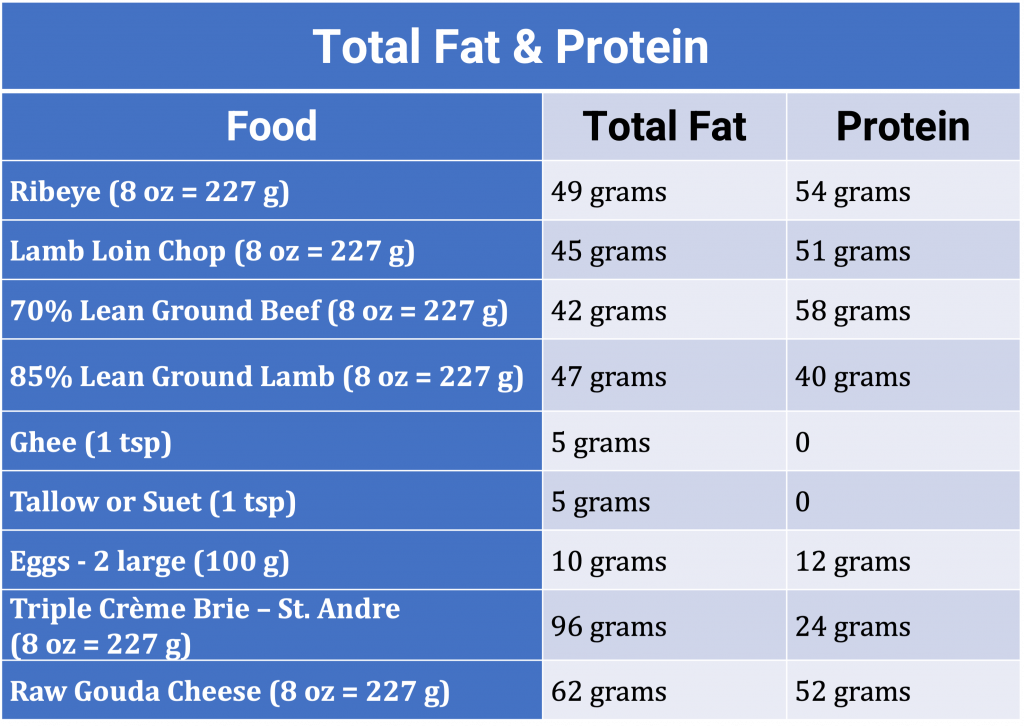 Here are links you may find helpful …

Many people eating this way may only want to eat once or possibly twice a day. Again, you eat when you’re hungry and stop when you are comfortably full. There is no specific “breakfast”, “lunch”, “dinner”, or “snack time” that you must adhere to.

Personally, I cycle in and out of ketosis. On the days I am in ketosis, my carbohydrate intake is less than 25 grams daily. When I cycle out of ketosis and become a carb-burner, my grams of carbs may be over 125 grams those days. This cycling helps my body stay metabolically flexible.

Many people whom I speak with are shocked when I emphasize that animal fat needs to be included in their diet. I personally was confused when I learned the health benefits of animal fat. But what I learned is that you “can teach old dogs new tricks”.

My earlier “education” of animal fat was that it created health dangers and needed to be avoided. Today, many nutritional supplement companies and healthcare professionals that I have great respect for are still condemning the consumption of animal fat and animal products.

It is encouraging that medical controlled studies now are being published that clearly state and prove that animal fat is healthy and even critical for overall health and wellness. But it will take time to change people’s minds. And the food industry has an ulterior motive to continue the false claims that animal fat is the villain and must be avoided and substituted with their polyunsaturated and highly processed food products.

Don’t just take my word for it. Try a little experiment for yourself. For the next two weeks, consciously add more healthy animal fat into your diet and monitor how you feel. One of my favorite brain-boosting breakfast tips is to blend a spoonful of ghee into your coffee. The trick here is to use a frother or stick blender so you get that rich, cappuccino-like texture. You can find more high fat, nutritious recipes here.

Let me know how it goes! Drop me a line in the comments section or send me an email with your results. 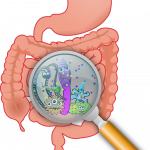