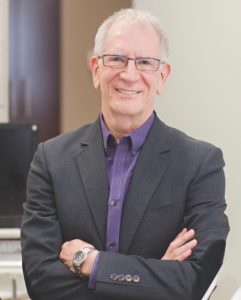 Dr. Al, as his patients call him, has been a periodontist for over four decades.

He divides his career into two periods: before and after the laser coupled with the dynamics of ancestral nutrition. The laser-based LANAP® protocol and the importance of ancestral nutrition, he believes, are revolutionizing the treatment of gum disease. “LANAP is reengineering how I treat periodontal disease. There is no cutting with a scalpel blade and no stitches. And the realization that evolutionary nutrition is the basis for total body health is mind boggling.”

His G.U.M. Protocol, based on evolutionary nutrition, assists patients in eliminating unhealthy lifestyle routines and poor food choices by replacing them with healthy ones. The body needs nutrient-dense foods and healthy gut bacteria to create amazing results. Poor nutrition and unhealthy gut bacteria lead to various medical and dental diseases and imbalances.

It’s more exciting for me to save teeth than to replace them.

Dr. Danenberg acknowledges that traditional gum surgery could achieve results that were “okay, but never terrific. After 35 years, I now am getting much better results with much less discomfort for my patients.” LANAP takes far less time, with little or no pain, and the patient can often return to work the next day. “And by incorporating the principles of evolutionary nutrition, I am helping patients heal and strengthen their entire bodies.”

Dr. Al’s passion for periodontics in general—and for the LANAP protocol combined with his emphasis on evolutionary nutrition in particular—is palpable. He gives seminars regarding the cutting-edge concepts of nutrition and laser treatment to the general public and is happy to spread the word among his fellow professionals. He has been a member of many dental and periodontal organizations, including the American Academy of Periodontology and the American Academy of Implant Dentistry. Currently he enjoys Life Membership in the American Dental Association.

Dr. Al received his dental degree from the Baltimore College of Dental Surgery in 1972, and his Specialty Certificate in Periodontics from the University of Maryland, School of Graduate Dentistry in 1974. The following two years he was Chief of Periodontics at Charleston Air Force Base, and later had periodontal practices in Charleston and Columbia, South Carolina. Along with his active practice, he wrote and published from January 1990 through December 2001 “The Personal Report” newsletter, which was mailed quarterly to every periodontist in the United States. He joined Beaufort Family Dentistry in South Carolina in 2009 and was treating patients at Bluffton Center for Dentistry until he retired from active clinical practice at the end of 2018.

Dr. Danenberg received advanced training in evolutionary nutrition from the Kripalu Center for Yoga and Health as well as The Center for Mind-Body Medicine. He received his CFMP (Certified Functional Medicine Practitioner) designation from Functional Medicine University in June 2014, and the Primal Health Coach Certification in September 2014. In 2015, he was appointed to the faculty of the College of Integrative Medicine and created its integrative periodontal teaching module. Then, in April 2017, he earned the designation of “ADAPT Trained Health Professional from Kresser Institute, the only functional medicine and evolutionary health training company”.

He still provides a unique opportunity for anyone to discuss their nutrition and periodontal questions with him live online at DrDanenberg.com. His book, Crazy-Good LIVING!, was published by Elektra Press in July 2017.

He and his wife Sue have been married since 1969 and have two adult children and three grandchildren.