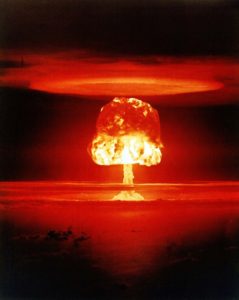 Maybe I’m being too dramatic. But, I’ll still take the liberty to call gluten, the original weapon of mass destruction. Let me explain.

Gluten is a family of proteins that is present in wheat, rye, barley, and some other types of grains. As a matter of fact, gluten could be an ingredient in many processed foods, cosmetics, prescription medications, and nutritional supplements. The human body cannot completely digest gluten. One of the remnants of the incomplete digestion of gluten is gliadin.

If gluten is the original weapon of mass destruction, then gliadin is the trigger that causes the destruction.

Gliadin has the potential to slowly and deliberately destroy your body. Its effects are cumulative, producing chronic inflammation over time. It opens holes in the gut lining, allowing substances to leak into the bloodstream that should never be there. Researchers have proven this damage occurs in every human whenever gliadin is present in the intestines.

Gliadin causes a chemical reaction in the intestinal wall. As a result, cells in the one-cell-layer-thick lining of the gut separate. Then, undigested particles of food and toxic substances can leak through the openings into the bloodstream.

However, the human body is resilient. The cells of the intestinal wall replace themselves every couple of days. If gluten were not reintroduced into the diet again, then there would be no permanent damage from this onetime occurrence. But, the problem is the process of repetition – constantly consuming gluten.

Unhealthy leakage from the intestines into the bloodstream is known as a leaky gut. Gliadin triggers the breakdown in the gut lining. When undigested particles of food or toxic substances get into the bloodstream that never should be there, the immune system becomes activated. The immune system is like an army that is called into battle. The immune system’s purpose is to get rid of foreign elements. The process to rid the body of irritating substances is called inflammation.

Inflammation by itself is normal and is necessary for a healthy body to function and heal. However, when holes in the gut lining occur regularly from continuous reintroduction of gluten in food, inflammation becomes constant. Constant inflammation is unhealthy. It affects the entire body and can cause damage to any organ or tissue anywhere in the body.

Through a complex system that is not completely understood, the immune system may go haywire. The immune system could begin destroying healthy tissues in the body. The result is called autoimmune disease.

In essence, gluten (as the original weapon of mass destruction) provided gliadin (the trigger of the weapon) to ultimately become the precursor to most (if not all) chronic and autoimmune human diseases.

The manifestation of a chronic or autoimmune disease could take years to develop from repeated insults to the body. A person probably would not know these destructive changes were slowly occurring. Damage becomes cumulative until the disease becomes obvious many years after the first insult occurred long ago.

Systemic chronic inflammation may play a role in the development of gum disease. The chemicals that are released in the bloodstream from chronic inflammation may affect the cells around teeth, making them more susceptible to bone destruction and the progression of periodontitis. This article suggests various scenarios implicating autoimmunity in the progression of periodontal disease.

Our body is a marvelous machine. It will repair and replace its tissues on a regular basis. However, when there is constant and site-specific damage, the body’s reaction is to become chronically inflamed. Once the seed of mass destruction is planted and nurtured, chronic degenerative diseases ultimately result.

The first and most important action to take is to avoid whatever stokes the flames of inflammation. In this case, stop eating or using any product that contains gluten!

Dr. Danenberg Featured On Beyond Your Wildest Genes