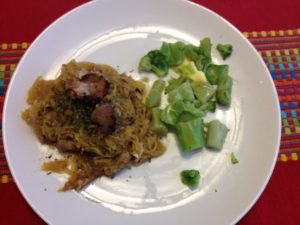 My wife and I love to experiment with food – Paleo-type food of course. We came across a recipe for clams and bacon sauce over spaghetti – certainly a no-no for Paleo aficionados. So, we doctored it to make it Paleo. The result was fantastic: clams & bacon over spaghetti squash. In my opinion, we created a winner.

We substituted the spaghetti with spaghetti squash, and we changed the ingredients in the sauce to make it completely Paleo.

The bacon is from pastured pork, and the canned chopped clams are from Bar Harbor that have no additives.

I. Cut, Cook, and Shred Squash:

“If You Are Holistic, Why Do You Take Dental X-Rays?”