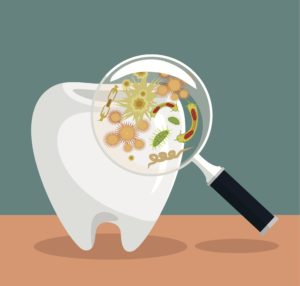 I wrote an article in 2016 about the balance of bacteria in the mouth. In early 2017, I posted a blog titled, Want Healthy Gums? In this article I explained the importance about good mouth bacteria and a critical biological process where these bacteria help create necessary nitric oxide for the body. New medical research is proving there are harmful consequences to our blood pressure and heart health if these healthy mouth bacteria are destroyed indiscriminately.

Specific and naturally occurring anaerobic bacteria on the top surface of your tongue play a necessary role in overall health. These bacteria eventually initiate the development of a large percentage of nitric oxide throughout the body.

Here’s how it happens:

After you eat leafy greens that contain natural nitrates, your body absorbs these nitrates through your upper GI tract. About 25% of these nitrates are concentrated into your saliva. The normal anaerobic bacteria on your tongue change the nitrates in the saliva into nitrites. Then, you swallow the nitrites. Nitrites then move throughout your body and are further changed into nitric oxide (NO). Nitric oxide is critical for overall health.

Some of the functions of nitric oxide are to reduce blood pressure, reduce the risk of cardiovascular disease, improve athletic performance, and improve gum health.

In 2017, Nathan S. Bryan and coauthors reviewed the current research describing the importance of oral bacteria on the nitrate/nitrite/nitric-oxide pathway. The authors concluded,

With the loss of NO signaling and homeostasis being one of the earliest events in the onset and progression of cardiovascular disease, targeting microbial communities early in the process may lead to better preventative interventions in cardiovascular medicine.

The authors further stated at the end of their article:

This is a mighty big statement that requires an explanation.

First, think about this question: If there were a species whose only means of getting nutrition was by chewing food, and if this species had rampant tooth and gum disease causing the loss of those precious teeth, what would happen to that species over thousands of years of evolution? The answer: This species would die off, because it couldn’t survive over time. Now consider this fact: Primitive man and woman from Paleolithic and Mesolithic periods did not have gum disease or tooth decay. Why is that?

Let’s step back and consider animals in the wild. They don’t develop dental decay or gum disease or degenerative diseases like modern-day humans, and they don’t get fat like modern-day humans, either. They may lose a tooth in combat, and they do gain weight intentionally to prepare for the cold, winter months or hibernation, but they use this storage naturally and lose it naturally. They eat food in the wild when their bodies tell them they are hungry, and they stop eating when their bodies tell them they are full. But get this: When chimpanzees and other wild animals are raised in captivity, they do have dental problems; they do get fat; and they do develop chronic degenerative diseases if they are not fed their natural diets.

The differences between wild animals and us are that there are no fast foods or sugary drinks or frozen dinners with a gazillion additives and preservatives in the wild. Wild animals don’t eat meat that has been artificially fattened with hormones and antibiotics. And they don’t eat genetically modified foods that have never been tested for long-term effects on their bodies. Wild animals eat what their bodies have been designed to eat for thousands of years. In contrast, we eat what has been processed, refined, hybridized, and genetically modified over the last several decades. Our bodies are rebelling.

Primitive man and woman were hunters and gatherers. They ate the foods that their environments provided for them. They did not eat the processed, refined, hybridized, and genetically modified “foods” we stuff into our bodies every day.

What do you think might happen to gum disease if we actually address the nutritional causes of the disease, and then treat it with the most cutting-edge method that is becoming the standard of care in dentistry today?

Here is what you could do: You could make healthier choices with your meals by eliminating the bad foods, specifically grains and grain products, as well as processed foods containing high fructose corn syrup and other refined sugars. In addition, you could include fermented foods like sauerkraut and yogurt and kefir daily, which may help repopulate the good bacteria in your gut and replace the bad bacteria. Of course, this will take time. It won’t happen in just a few weeks. So be patient.

Along with improving the nutritional balance in your body, the source of major gum problems could be treated with the PerioLase® Laser, which kills the bacteria causing this disease without harming healthy cells and without using a scalpel or sutures. It also helps grow new bone.

So here’s the bottom line. You can stop gum disease by:

(This article originally appeared in CH2)