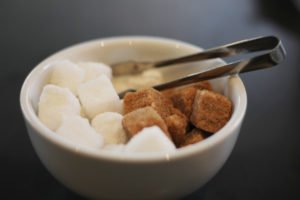 I have written about soda and sugar’s effects on the mouth. Sugar alone is the major cause of tooth decay. However, sugar causes more than rotten teeth. It is the major cause of metabolic syndrome, which is the precursor to many chronic diseases like diabetes, cardiovascular disease (CVD), and non-alcoholic fatty liver disease (NAFLD).

Robert Lustig, MD, and his co-researchers wrote two interesting papers, which were published in 2016. They studied 43 children with obesity and metabolic syndrome. The study lasted 10 days. At the start of the study, researchers recorded the children’s specific parameters for metabolic syndrome while on their normal diet. Over the course of the remaining nine days, the children were given meals to eat, which had all added-sugars removed. Basically, the children ate the same calories including the same protein and fat percentages as their normal diet. However, starchy foods replaced all added-sugar foods . The diet even included unhealthy processed foods, which did not include added-sugars. If the participants’ weight declined during the trial, the researchers increased the amount of food to sustain their weight without adding any sugars. At the end of ten days, the researchers again recorded the measureable markers of metabolic syndrome.

The results demonstrated that every aspect of their metabolic health improved, with no change in weight since weight was controlled. Blood pressure, triglycerides (TG), low-density lipoprotein (LDL), insulin sensitivity and glucose tolerance all improved. All this happened in only nine days by removing added-sugars.

In a further analysis and later publication of this study, there was an improvement in lipoprotein profiles, which indicated a reduction of risk factors for cardiovascular disease. Specifically, there was a reduction in TG, apoB, apoC-II, apoC-III, apoE, and LDL-C. In addition, LDL size increased, small-sized HDL decreased, and the TG/HDL ratio lowered. Once again, these improvements occurred after removing all added-sugars for only nine days!

This study shows that sugar is a major causative factor for metabolic syndrome and cardiovascular risk. The authors stated that this was the first human research project in obese children exhibiting metabolic syndrome that demonstrated that health detriments of sugar, and fructose specifically, were independent of sugar’s caloric value or effects on weight. The takeaway is that all of us can improve our overall health by just removing added-sugars from what we eat.

I am concerned with oral health and overall health. Many of my patients want to change their nutrition and lifestyle to improve their overall health and their dental health. For those patients, I first suggest they fill out a 3-Day Food Journal. Their Journal will show them and me the foods they are eating that may be harmful to their bodies. Then, I isolate the most offending foods and suggest substitutions that may be healthier. Processed grains, all added and concentrated sugars, and unhealthy fats and oils are the most offending foods. That’s how I start my education program for all who want to be proactive with their health.

Karen Mozzo, publisher of CARE Magazine, recently interviewed me. She wanted to help readers of the magazine get a handle on how Paleo would work with kids, and how dental health was related to all of this. Here are her questions and my answers:

QUESTION:
Is a Paleo diet a healthy diet for children under age 18?

ANSWER:
Absolutely. But the term “diet” is misleading. A diet generally is a strict form of eating where calories are counted and portions of food are measured in some fashion. A Paleo diet is really a lifestyle of eating nutrient-dense foods with no concern for calories. When the proper foods are eaten together, then the body begins to regulate its digestive hormones, and the body will tell you to stop eating because it is full. Every meal should be thought of as a plate of food. Conceptually, at least one-half of the plate should consist of non-starchy vegetables; about one-quarter should consist of some type of protein; and the last quarter or less could be make up of healthy fats, and possibly a starchy vegetable, or some nuts or seeds, or some deeply colored fruits. The nutrients that are available from eating animal products, vegetables, fruits, nuts, and seeds are all the nutrients that the human body needs – no matter what the age.

QUESTION:
Does some sugar in a child’s diet mean they are destined for poor dental health?

ANSWER:
Sugar in the natural form is not the same as concentrated sugars and refined sugars that actually are added to foods like processed foods. Sugars that are in fruits are much healthier than the sugars a child gets in soda, sports drinks, cakes, cookies, candy, and the list goes on and on. However, if too much fresh fruit is eaten instead of balancing fruit with proteins and vegetables and healthy fats, then too much fructose will accumulate in the body creating excesses for the liver and the brain, damaging the gut, and creating fat deposits around the waist. Sugar is a fermentable carbohydrate, and if bad bacteria are predominant in the gut and in the mouth, and if sugar is a dominant element in the child’s diet, and if healthy nutrients are not part of the child’s diet, then tooth decay will be inevitable.

QUESTION:
How do you suggest dealing with the typical parent’s dilemma of keeping sugary foods out of their children’s diet? Regulating or eliminating sweets, sugary drinks, refined milk products, processed grain treats may be the best idea, but it’s often not practical for a parent. Often times, parents are not even aware if their child has sugar… i.e. a sports drink or “energy” bar after a Little League game; cakes or sweets at a birthday party.

ANSWER:
Parents are in control of the foods that are presented to their children. Healthy foods are easy to provide, but in the beginning there is a learning curve. The books I recommended in my last article have excellent meals that are easy to prepare and delicious to eat for the whole family. Many of them are easy to pack up and take on a trip or to school.

The foods that are most important to eliminate are grains and added sugars. Whole foods will not contribute significantly to an unhealthy level of sugars. If a child’s food choices in the home are generally healthy, then some cheating outside of the home is not going to be a problem. Dr. Loren Cordain, who is the “godfather” of Paleo research, states that if a person is 85% compliant, then that person overwhelmingly will benefit from a Paleo eating lifestyle.

The younger the child is when you start a Paleo lifestyle, the easier it will be to follow. An older child’s eating habits may be more difficult to change but not impossible. Take baby steps, but children learn from what they see at home. You are their model.

QUESTION:
Parents these days are so often in a hurry to get everything done in a typical day. Grocery shopping presents quite a hurdle in these cases… it’s so much easier to ‘grab and go’ when your child is hungry and you need to get them fed. What’s a parent to do?

ANSWER:
Again, try to avoid the grains and added sugars when your child is fed. Shop the outer aisles in the grocery store where the more natural foods are located and avoid the packaged and overly processed foods in the center of the store. If purchasing packaged foods, look at the ingredients, and be selective. You will be amazed at what are in some of these “foods”. Again, grains and added sugars are the most troublesome. You may not be 100% Paleo, but you will be providing your child with a very healthy foundation.

Some quick ideas for on-the-go:
• Raw almond butter spread on stalks of celery
• Raw vegetables and/or sliced fruits with individual containers of live-culture, • • full-fat yogurt for dipping. Add spices to the yogurt to create different flavors
• Chicken salad or tuna salad with chopped nuts, blueberries, and cut up celery. Lettuce leaves (butter or Romaine lettuce) are good for a wrap
• Raw macadamia nuts

QUESTION:
If you eat out while ‘on the road’, are fast food places forever banned? What if they’re on their way to an out-of-town game and can’t take the time to stop for a sit down meal?

ANSWER:
Fast food places usually are not a problem once you understand what you cannot eat.

Some examples of what to eat:
• Some type of salad with olive oil and vinegar dressing and whatever spices that are available at the restaurant.
• Hard boiled eggs, hamburger or chicken meat – crumbled up and tossed into the salad
• Fresh fruit if available
• Water, unsweetened iced or hot tea, or seltzer

Imagine an animal in the wild – a cute, cuddly little thing. And let’s say this animal was living 200,000 years ago. In order for this animal to survive and thrive, it needed to chew its food to get the necessary nutrients into its body. As this animal was growing up, something was happening. Its teeth began to decay, and its gums started to bleed. Soon, this fury guy started to have pain when he chewed his food, and eventually his teeth started to get loose. Then his teeth began to rot and fall out. And this was happening not only to him but also to most of his brothers and sisters and their offspring. What do you think would happen over time to this animal species?

The answer is that this species would eventually die off because it could not survive without its teeth to chew the food to get the nutrients that were critical for life.

As a matter of fact, primal man and woman hardly ever had tooth decay or gum disease during the 2.5 million years of evolution. Our evolutionary ancestors ate a nutrient-dense diet and had healthy gut bacteria that allowed their teeth to stay healthy. Then things changed about 10,000 years ago.

As grains become a staple part of our diets, our overall health declined. Today, the Standard American Diet consists of refined carbohydrates, unhealthy fats, lots of sugar, and a variety of processed foods. However, not everybody eats this way.

There are people living today in isolated parts of the world as hunter-gatherers. They eat the food that their natural environments provide. They never have been exposed to the Standard American Diet, and they do not have tooth decay or various degenerative diseases that plague most of the world’s modern population. Unfortunately, when some of these people leave their native surroundings and start eating unhealthy diets in the “Western” world, their health begins to decline rapidly.

The solutions are learning and believing what nutrient-dense food and healthy gut bacteria are all about as well as yielding to the needs of our individual cells.